Taking stock: Are we losing steam? Is our identity coalescing?

I don't have access to stats, so it may just be an false impression, but it does seem like the question 'velocity' has slowed down a bit here. Area51 certainly says we 'Need Work' - though I guess that's better than 'Worrying'. 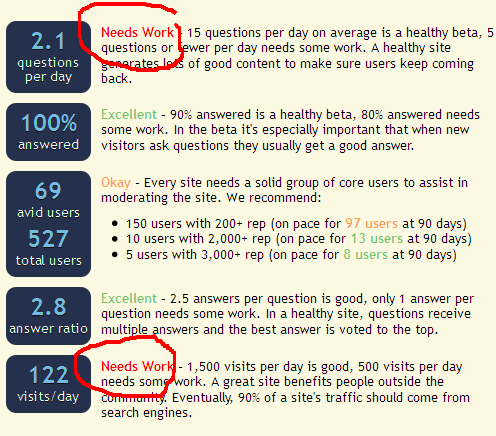 Personally, I'm not sure what to do about the visits/day: there's a limit to how much I can reasonably bassiner my acquaintances. However, concerning the questions per day, I wonder if we don't 'self-censor' too much (example).

Relatedly: how do you feel about our 'identity'? What are we 'about'? For example, take the first page of questions-sorted-by-votes: do you personally think this represents the 'best of the crop'?

You don't need stats to see that there's not much traffic these days. It's common for Stack Exchange sites to have quite a bit of traffic in the first couple of weeks, then the traffic drops and slowly rebuilds. I don't have much hard data to offer, but I think the drop has been particularly marked on this site, after a relatively active private beta. Still, pretty much every site goes through a phase when Area 51's questions-per-day and visits-per-day statistics “need work”. You can see the list of Stack Exchange sites sorted by various statistics — FLU isn't doing very well on volume, but isn't the bottom of the barrel.

One thing I do note is that for what is roughly FLU's second month (specifically 2011-09-17 to 2011-10-10), search engines accounted for 25% of the traffic, with 8% direct and the rest coming from referring sites (often other Stack Exchange sites, primarily Stack Overflow). As a comparison, in SF&F's second month, search engines accounted for about 12% of the traffic (11% direct). My interpretation is that FLU draws less from other Stack Exchange sites. I think this is on the whole a good thing: Stack Exchange sites can sometimes suffer from being mostly frequented by programmers with a hobby, as opposed to experts in the site's topic. We're doing well on not being a programmers' forum.

What I like about the site is the quality of the questions and answers. It is a lot easier to make a site grow from a small number of high-quality posts than to improve the quality of a site with a lot of low-quality posts. I do not encourage people to lower their standards for the sake of creating traffic: rather, strive to come up with difficult, interesting questions. And when you see an easy question, try to go beyond the question and write the definitive answer on the topic — with notes on the nuances of alternate formulations, links to online dictionaries of various dialects of French, ngrams, etymological and linguistic remarks citing academic papers, ...

In the most upvoted questions, I see a mixture of very good questions and middle-of-the-crop questions, many of them asked during the private beta. This is to be expected: beyond a certain point, votes indicate bikeshedding questions far more than interesting questions.

We still haven't settled our biggest debate other than by default (meaning both languages are effectively used). Since the beginning of the month, I count 16 questions in French and 7 in English: a clear majority but absolutely not an overwhelming one.

What should we work on?

Seeing the promising share of traffic from search engines makes me think we should work on two things:

Not the answer you're looking for? Browse other questions tagged discussion area51 .

6
Are questions only about French language, not its usage are allowed?
8
Style to be used in tag wikis' summaries?
4
Un pas vers la nouvelle orthographe… ou pas ? — One step towards new orthography... or not?
8
Should we point regionalisms in answers ?
4
Are translations of "new" terms on-topic here?
2
2019: a year in moderation
2
Community Promotion Ads — 2020
5
Is it time to revise our community-specific close reasons ?
7
Custom French Language design and logo - Information gathering