I joined FSE two years ago. I am very happy for having found it. My French (and in particular spoken one) has much improved. I highly suggest FSE to my colleagues (in particular teachers of French as FSE) and students alike. Even to French native speakers:)!

However, is it just my idea or not that FSE is not so active as it used to be? I see some old posts of three or five years ago and there were (ten of) thousands of views and tens of votes? Am I mistaken or not? If I am right what has caused this inactivity?

How can we explain it?

It is a subject I've been thinking about for quite some time. I tried to analyze some data, and here are my leads so far:

Several valuable contributors (and even moderators) decided to dramatically decrease (if not totally stop) their activity on the StackExchange network, following what happened with Monica Cellio about a year ago. Two of our moderators (Gilles and Stephane) resigned from FSE. By looking at our all time best contributors, only 4 out of the top 10 remain regularly active to this day. Out of these 10 people, at least 4 of them directly expressed their disagreement towards SE policy.

Another stat: so far this year, 4 people earned 1,000 reputation or more. Last year, there were 21 people in that case (to make this calculation, I took people who got 1,333+ reputation over the year because we are currently at ~75% of the year, and I had to assume that their progression was linear).

By looking at this year's best contributors, only 3 out of the top 20 joined FSE this year, and only 1 of them has been active in the last month.

Using StackExchange API, I also looked into the number of new users, and it has decreased this year (for this year, I calculated the expected number given the current number at the current time):

What can we do?

I think this is a problem common to all sites on SE network (probably because of the system itself), but I'm convinced there are a few simple things that we can do to try and keep our new users.

-> Be nice: try to greet people, make them feel welcomed, and explain them why they did something wrong.

-> But also to each other: try to avoid arguing (I've seen a few comment battles recently, and honestly some of them could have been avoided).

-> Reward: upvote new users when they make relevant contributions. If you downvote, explain!

- Try to bring our core members back

To be honest, I don't think there is anything we can do at FSE. But I have hopes that StackExchange, as a company, is trying to build back the link with its community. There seems to be a real inside questioning, and maybe that can help some of our good old members to come back and try to help us build FSE back.

As moderators, I feel like there are a few things we could do to improve the situation, and Tsundoku always has nice suggestions based on what happens on other SE websites.

First of all, he suggested that we encourage voting, like they did in Latin and LLSE. The reasoning is that, if we tell people to vote, they will look at more questions, more carefully, and might want to bring their own grain of salt by attempting to answer. Also, having more vote interactions is sane for the site because it generates more reputation, and encourages good contributors. Not everyone is driven by Internet points, but let's face it, a lot of us are.

Another suggestion I could make is that we, as moderators, animate the community. For example, we could have a monthly theme, a bit like Literature SE's topic challenge, where we reward all questions and answers with bounties. The topics could be French authors, writing styles, curiosities of the French language... The general idea is to encourage our already active users to post more content, so that the site gets more dynamic.

To be honest, I'm not sure that there is much more we can do at our small scale, apart from advertising FSE everywhere on the Internet. But maybe with more interactions occurring on our site, things can start going upwards again!

Most visitors on Stack Exchange sites (depending on the site, generally about 90%) come here after searching on Google or another search engine. Some questions are very often asked (so they are quite old) and they generally build up those amounts of views over a significant amount of time. (Votes is another matter; those anonymous users can't vote of course.)

That said, activity has decreased a little bit, as this graph of the average number of questions in four weeks shows: 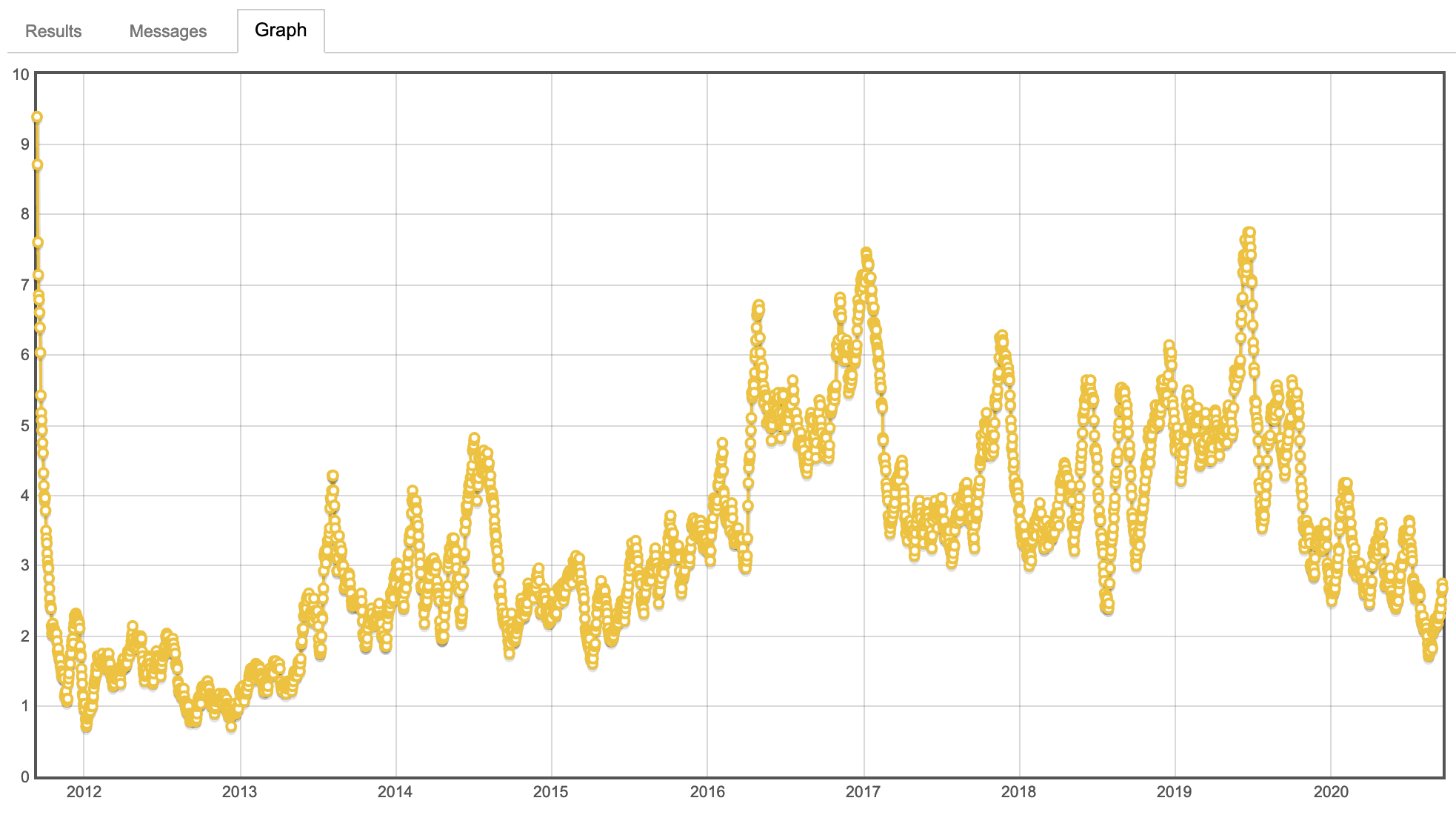 I have no idea for the cause of this decrease in activity, though.

A problem with FSE (and likely other StackExchange language sites1) is that there is too wide a gap between the different kind of people expected to participate.

French Language is a question and answer site for students, teachers, and linguists wanting to discuss the finer points of the French language.

While in the beginning there was probably more people with the linguist or (French language) teacher profile, in the recent years, there was more or less two groups of active people, non native ones expecting to improve their French, and amateurs (like me), often more knowledgeable in the software side. The latter come here to help learners, improve their French too, practice/improve their English, learn things and have some fun.

Unfortunately, unlike experts, amateurs often tend to teach what they have been taught even while it might no more be considered valid, disregard colloquial/spoken French toward formal/written French, consider the only true French is the one of the Académie française, consider that there is only one way to speak French which is the one of upper class Parisians.

French is then, possibly more than many other languages, a political and controversial topic. While a little bit of contradiction is fine, too much arguments tend to reduce the fun side of FSE. Some users definitely left FSE after being harassed by others.

Another well known problem of the StackExchange system is that the person asking, supposedly not the more knowledgeable on the subject, is the one selecting the good or right answer.

The open poster also often tends to thank some or all respondents by upvoting their answers, regardless of the quality of these answers. This is especially true when an answer contains a lot of lines, whether most of it is garbage/irrelevant or not.

Moderators are not allowed to correct such situations. The voting system is supposed to smooth this effect and eventually let the "best" answers emerge.

This is relatively true but there is a flaw. Negative votes affect linearly the user's reputation just like positive ones but because a negative vote is five times less influential that a positive one, garbage authors might mechanically end up with an high level reputation if they are active enough. @Evpok suggested a way to deal with this caveat: to have the negative vote weight to increase quadratically instead of linearly. That would be a good idea to suggest to SO developers, but I wouldn't hold my breath...

The only thing moderators can do is to take action when there is a violation of the code of conduct, but being a flat-earther or a quack is not considered as such. As long as they are "nice", they can stay and embarrass the site...

1 English reduces the problem with having two sites, ELU and ELL.

A valid reason is loss of interest or disappointment.

StackExchange uses a collaborative model that reinforces inequities. The stated objective is not achieved: it divides the participants without significant benefits. On one hand, the gap between participants widens, negative votes are blurred, everyone contributes for himself. On the other hand, the answers given by the most active or highest rated participants are often questionable on FSE. One can be discouraged by the results reached.

Alice decides to sanction Bob because of the deplorable quality of his interventions which are very prejudicial to the site. She invests as much as possible to reduce their reputation (their number of points). She decides to make a big effort. She plans to vote three times a week at the authorized daily limit (40 downvotes). According her calculations, she will realize that she will have few points left while Bob will not have lost any points. Indeed, the points earned in the month will have been cancelled (480 points) while Alice will likely have losts all her points (in addition, some users decided to downvotes its posts).

Warning: StackExchange detects and cancels negative or positive votes cast by one profile for another profile based on certain parameters such as the ellapsed time between each vote or the number of votes in a given period of time. It is a protection to avoid abuses. On the other hand, the implicated user is sanctioned.

Note: The scenario contains some inaccuracies but reveals some flaws. For instance, Alice would have actually voted 20 times a day against Bob's posts. Indeed, the voter loses one point and the other user loses two points for each downvote. Nevertheless, it is a plausible configuration. The important thing to remember is that Alice can't do anything to counter Bob's position.

Alice realizes with disappointment that it is counter-productive to participate on this site.

Not the answer you're looking for? Browse other questions tagged discussion .